EVER requires no manual adjustment of parameters and has been implemented as an easy-to-use ImageJ plugin that can immediately enhance the quality of reconstructed super-resolution images. This method is validated as an efficient way for robust nanoscale imaging of samples with heterogeneous background fluorescence, such as thicker tissue and cells. 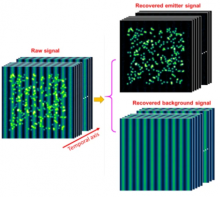 NanoJ-SQUIRREL (Super-resolution Quantitative Image Rating and Reporting of Error Locations) is a software package designed for assessing and mapping errors and artefacts within super-resolution images. This is achieved through quantitative comparison with a reference image of the same structure (typically a widefield, TIRF or confocal image). SQUIRREL produces quantitative maps of image quality and resolution as well as global image quality metrics.

This script includes a rough feature detection and then fine 2D Gaussian algorithm to fit Gaussians within detected regions. This macro is unique because the ImageJ/Fiji curve fitting API only supports 1-D curve. I get around this by linearising the equation. This implementation is for isotropic (spherical) or anistropic (longer in x/y) diagonally covariant Gaussians but not fully covariant Gaussians (anisotropic and rotated).

Stochastic optical reconstruction microscopy (STORM) and related methods achieves sub-diffraction-limit image resolution through sequential activation and localization of individual fluorophores. The analysis of image data from these methods has typically been confined to the sparse activation regime where the density of activated fluorophores is sufficiently low such that there is minimal overlap between the images of adjacent emitters. Recently several methods have been reported for analyzing higher density data, allowing partial overlap between adjacent emitters. However, these methods have so far been limited to two-dimensional imaging, in which the point spread function (PSF) of each emitter is assumed to be identical.

In this work, we present a method to analyze high-density super-resolution data in three dimensions, where the images of individual fluorophores not only overlap, but also have varying PSFs that depend on the z positions of the fluorophores.