Local Z Projector is an ImageJ2 plugin, available in Fiji, that can perform local-Z projection of a 3D stack, possibly over time, possibly very large.

LZP performs projection of a surface of interest on a 2D plane from a 3D image. It is a simple tool that focuses on usability and is designed to be adaptable to many different use cases and image quality. 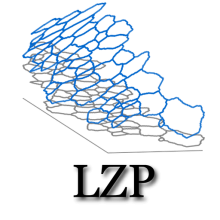 It detects cell nuclei by fitting gaussians on their fluorescent intensity.

It can run on GPU using CUDA and is called via the command line.

OligoMacro Toolset, is an ImageJ macro-toolset aimed at isolating oligodendrocytes from wide-field images, tracking isolated cells, characterizing processes morphology along time, outputting numerical data and plotting them. It takes benefit of ImageJ built-in functions to process images and extract data, and relies on the R software in order to generate graphs.

SIMPLETRACKER a simple particle tracking algorithm that can deal with gaps.

Tracking , or particle linking, consist in re-building the trajectories of one or several particles as they move along time. Their position is reported at each frame, but their identity is yet unknown: we do not know what particle in one frame corresponding to a particle in the previous frame. Tracking algorithms aim at providing a solution for this problem.

simpletracker.m is - as the name says - a simple implementation of a tracking algorithm, that can deal with gaps. A gap happens when one particle that was detected in one frame is not detected in the subsequent one. If not dealt with, this generates a track break, or a gap, in the frame where the particle disappear, and a false new track in the frame where it re-appear.