QuickFit 3 is a data evaluation software for FCS Fluorescence Correlation Spectroscopy and imagingFCS (imFCS) measurements, developed in the group B040 (Prof. Jörg Langowski) at the German Cancer Research Center (DKFZ). Actually QuickFit 3 itself is a project manager and all functionality is added as plugins. A set of tested plugins for FCS, imagingFCS and some microscopy-related image processing tasks is supplied together with the software. 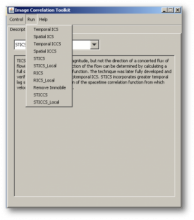